CSS3 makes it possible to specify an image as an element's border, instead of just a solid color. While on the surface this doesn't seem particularly interesting, the way the property works makes it more than that which meets the eye. The border-image property lets you specify a single image for the purpose and then slices that image to create the desired border effect. Yes, CSS is slicing now. border-image is currently supported in all the modern browsers to various degrees except IE (as of IE9). The shorthand syntax is:

For slicevalues, if only one number is defined, the same value will be used for all 4 cuts. If 2 numbers are defined, the first is used for the top and bottom cuts, and the second the left and right cuts. Regardless, 4 cuts are made to the image in total, and the browser ends up with 9 slices that it uses to put together the border image of an element. Each slice is used to fill the corresponding edges of the element's border, with the center slice covering the element itself (and should be made transparent in most cases).

This post isn't about a detailed description of border-image- that will have to be for another post. For this post, what I want to demonstrate is how to use this property to easily add image frames to containers on your page. First, create the image you'd like to use as the frame; here I've whipped up 2 simple frames to illustrate the technique:

Note that both images above have a transparent inside so the content they are framing can show through.

Now, to the heart of the matter- to add an image border to an element, define the border-image property with slicevalues that cut up the image as desired. Also define a border-width property echoing those values. Enough talk, to some examples now! Note that the below examples do not work in IE (as of IE9):

Found across much of the tropics, the coconut is known for its great versatility as seen in the many domestic, commercial, and industrial uses of its different parts. Coconuts are part of the daily diet of many people. Its endosperm is known as the edible "flesh" of the coconut; when dried it is called copra. The oil and milk derived from it are commonly used in cooking and frying; coconut oil is also widely used in soaps and cosmetics. The clear liquid coconut water within is a refreshing drink and can be processed to create alcohol. The husks and leaves can be used as material to make a variety of products for furnishing and decorating. It also has cultural and religious significance in many societies that use it. -Wikipedia 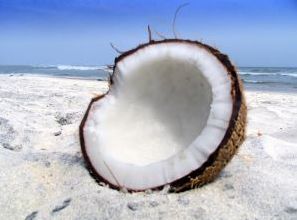 CSS: Same as above.